Jobinf1.com is mainly my own content but now and again I read advice or opinion from someone else which says it better than I ever could. Mark Priestley was a senior mechanic with McLaren for many years and has been there and done it all. Listen to his own story and the advice he gives for those wanting to make their own career in the sport.

People are always asking me how I got into Formula One in the first place and for any advice for them or their sons or daughters who might be eyeing up a similar career in the pitlane. To those who’ve approached me face to face, I always try and give the most in-depth and accurate description of my own experience and words of sincere encouragement for those who might like to follow in my footsteps. For the many who get in touch through Twitter or similar means, it becomes a lot more difficult to convey my genuine passion for the world of Formula One and the life that it becomes for those within it, in just 140 characters. 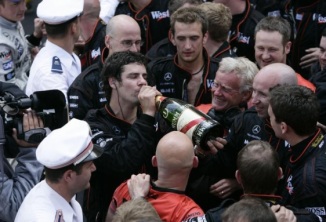 I grew up in a village in the UK, on the doorstep of Brands Hatch, which, during many of the formative years of my childhood hosted the British Grand Prix. I’ve no doubt that, even if subconsciously, that must be where the motor racing bug was contracted.

Friends of mine had a house whose garden backed onto the circuit perimeter and we’d regularly slip through a hole in the fence and into the woodland that lined the famous track. We had a wonderful and unique vantage point, albeit a touch on the dangerous side and more than once found ourselves bringing out the red flags as we were spotted crouching trackside and duly evicted by circuit officials. It was bad enough being responsible for bringing a test day or practice session to a halt as a truck was sent onto the circuit to pick us up, but even worse that they repeatedly threw us out at the main gate on the other side of the village, meaning a terribly long walk back to my mate’s house to collect our bikes.

Growing up with the sounds of motorsport in the air and the regular influx of international race fans and teams meant I was quickly hooked. I became fascinated by the workings of the sport and in particular, remember dreaming of what it must be like to be involved in those incredible pitstops. 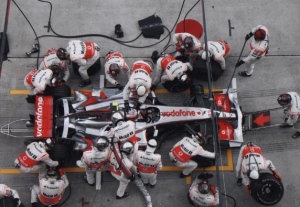 When it came to making decisions about my career, despite having a serious passion for motorsport, there was never any advice to follow my dreams from school advisors or teachers, it was much more about knuckling down and getting the academic grades. The advice was to focus on the subjects I was doing well at in school and then see what I could do with them further down the line.

I duly followed the advice (for once) and began A-Levels in subjects that I was good at, but in truth wasn’t excited about in the slightest.

It’s certainly not that it was bad advice. For many people that would be a very sensible path to follow, even for some as a possible route into F1, it’s just that deep down I knew I had my heart set on working in motor racing and wanted to be hands on. Until I’d at least given that a try I would never be fully committed to anything else.

Half way through my A-Levels I plucked up the courage to speak out and was fortunate my parents were very supportive. I made the switch to study Motor Vehicle Engineering.

Combining studies with various work experience placements gave me my first taste of actual trackside motor racing AND I LOVED IT. Working voluntarily with a small race team gave me a real life insight into what it was like and there was no turning back from the very first time I set foot inside a circuit wearing a team shirt. I may’ve been doing little more than making tea and wheeling tyres around at this stage, but I was 100% convinced this was where I belonged.

This is where one of my biggest pieces of advice for young people comes in. Work Experience.

We generally only get one opportunity in our lives to work for free and that’s when we’re young. Take that chance. Offer your services to as many places of interest as you can possibly fit in. Try as many different types of motorsport as you can, as many different roles as you can. Write to as many companies as you can, show your passion, give up your spare time for it, make yourself stand out from the pile of CV’s on the team manger’s desk. In today’s world it doesn’t take a genius to decipher a company’s email address format and if you can find out the names of people in the key positions at various teams, you can get a personal email directly into their inbox, rather than the traditional generic CV sent through HR. Be creative, persistent and innovative, not only will it get you noticed, but they’re key traits for working in F1 and that’ll give an insight into your personality as well as the document itself.

Having never really left the village I’d grown up in, it was a very brave me that, after finding a contact through a neighbour, offered my services to a Formula Ford team based in Milton Keynes and was given the chance to spend two weeks with them during my summer holidays. I packed a bag and went to live with one of the mechanics for a fortnight and had the time of my life. I spent time preparing the cars, took them testing at the Mallory Park circuit and eventually got to join them for a race weekend back at Brands Hatch. 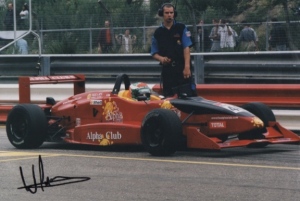 I did a good job, tried to be the best at whatever they asked me to do, was inquisitive and took in as much as I possibly could.

My mind was 100% set on a career in racing and I used my experience, albeit limited, to get an apprenticeship with a small team racing Caterham 7’s.

I had a clear goal of getting into Formula One, so worked my way up the ladder towards the top, all the time writing hopefully to F1 teams along the way. Every time I was at a race track with our little support series, I would seek out mechanics and engineers from the championships headlining the event, asking advice, making contacts.

The motor racing ‘ladder’ for single seater mechanics was much the same as it was for drivers back then, FFord, F3, F3000, culminating in F1. Coincidently, my path followed that of Jenson Button, moving into Formula Ford together and later onto British F3. Where he went straight from there into F1 with Williams, I persisted in constantly writing to every team and moved into Formula 3000 (GP2’s predecessor). 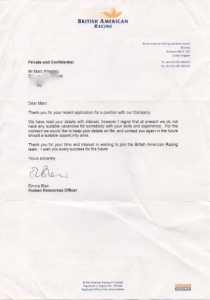 Eventually, by getting my CV onto the desk of McLaren’s test team manager through someone I’d met, I got myself noticed and amongst the steady stream of rejection letters landing on my doorstep from all quarters of my favourite sport, got an invite to come and meet him at the team’s factory.

To say I was excited would be an understatement of epic proportions and as the day drew nearer, the excitement was rapidly overtaken by nerves.

I remember sitting in my car in McLaren’s old car park, about two hours early, so as not to be late, thinking how incredible it was just to be on the property. I was shaking at the prospect of walking through the doors of a place that I read about daily. Meeting people, who in my little world, were some of the most respected and revered, almost celebrity-like, characters in my life…and that was simply because of the place they worked and the shirt they wore.

The interview went well and I got to meet a number of key people and even got shown around the famous factory. I remember thinking if I didn’t get the job, I’d still die a happy man with that experience alone.

Weeks later I got the call that I’ll never ever forget and that changed my life forever…I was a Formula One mechanic at McLaren.

I didn’t just get given a new job, but a new family and an entirely new life. It’s a life that’s incredibly hard at times, requires a great deal of sacrifice and absolute dedication, but in return offers more than I 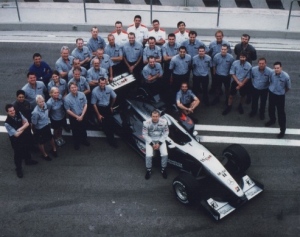 More than 15 years later, although no longer part of McLaren, I’m very lucky to still be part of the F1 family. I share the life with many of my best friends in the world and have been fortunate to enjoy and play a part in some amazing experiences.

My biggest piece of advice is to follow your dreams. If you’re passionate about working in motorsport, then be tenacious, grab hold of every opportunity and don’t let go until you get what you want. Opportunities rarely just appear, so create them for yourself.

It’s a wonderful world that offers things no other career can. Travel the world, meet friends for life, get the adrenaline rush, celebrate the good times and develop from the disappointments. 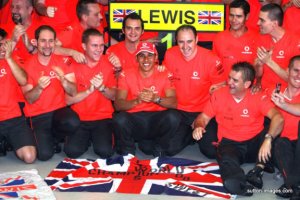 It’s best not to try and work out your hourly pay rate at times, but know that you’ll never be bored or have that dreaded ‘Sunday night feeling’ of having to go back to work on a Monday morning.

Hopefully I’ll see some of you in the paddock before too long.